Affiliated Idols (所属アイドル) are Idols who are currently under the Producer's care. 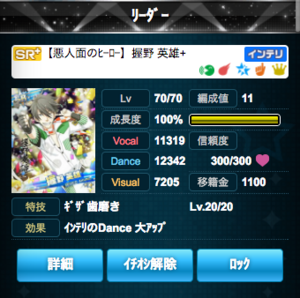 In the Affiliated Idols Summary, Producers can choose a Leader. A Leader Idol is the representative of a Producer and their team, especially during Program Auditions. Leaders are also visible to other Producers and cannot be used as a Lesson Base, nor can they be Transferred.

Beneath that, all of the Idols associated and under the Producer's purview are displayed and can be sorted by the statistics listed above.

Three different kinds of Units can be formed from the Unit Formation screen: Live, Audition Battle, and Featured. The former two kinds are dependent on the Formation Cost limit a Producer has. The limit is raised through gaining experience and increasing the Producer's Level.

Ten Idols can be placed into an Live Units, five Front and five Back. A total of four Live Units can be created: three custom, and one Auto-Unit. The Auto-Unit attempts to put together the Idols with the strongest stats for a well-rounded team. In custom Units, Idols can be manually entered into a Unit, or a Unit can be automatically formed by customizing parameters like Stat (Vocal/Dance/Visual) or Attribute (Physical/Intelligent/Mental).

Choosing one Unit as the Main Unit will automatically bring that Unit up during Live Auditions. The order and placement of Front Idols and Back Idols within a Unit can also be customized.

Unlike Live or Audition Battle Units, Featured Units/Ichioshi Units (ｲﾁｵｼﾕﾆｯﾄ) do not rely on any kind of statistics or Formation Cost. Instead, Producers choose their most recommended Idols for their Featured Unit. The Featured Unit is then displayed on the Producer's My Desk. All Idols will have their own default voice lines, while certain Idol combinations will trigger a short conversation between two of them.

A special feature of Units is Collaboration (連携). By including certain Idols from certain categories, all of the affected Idol's stats are increased slightly. Categories regarding Official Idol Units, Rarity and Attributes always invoke the Collaboration effect, but extended categories like blood types, horoscopes, age, and birth season occur randomly.

If a Producer is part of a Team, Money can be spent on a Voice Trainer, Dance Instructor, or Make-Up Artist. By increasing a Team's Staff Level, an extra stat percentage boost is added to all Units. Staff Levels max out at Level 20 and offer a 30% stat boost.

Retrieved from "https://sidem.miraheze.org/w/index.php?title=Affiliated_Idols&oldid=56926"
Categories:
Cookies help us deliver our services. By using our services, you agree to our use of cookies.