Beit is an Idol Unit comprised of Kyoji Takajo, Pierre, and Minori Watanabe. Beit features a princely theme while its members were all former part-timers.

Prior to their Idol activities, Kyoji, Minori, and Pierre all worked part-time jobs in the same city. They first met when Pierre visited Minori's flower shop. Minori, initially concerned about a child in a frog suit wandering alone in his shop for a long time, noticed Pierre was hungry. He took him to the convenience store where they met Kyoji working behind the counter.

One day, Pierre asked Minori how he could have the power to make everybody smile. Minori's answer was "something like an Idol." Upon hearing that, Pierre was adamant on becoming an Idol. Somehow, he and Minori managed to convince the Kyoji to join them... 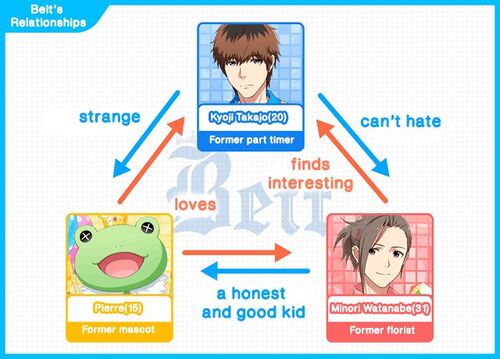 Retrieved from "https://sidem.miraheze.org/w/index.php?title=Beit&oldid=55769"
Category:
Cookies help us deliver our services. By using our services, you agree to our use of cookies.