THE iDOLM@STER: SideM (アイドルマスター サイドエム Aidorumasutaa Saido Emu) is the all-male spinoff of the THE iDOLM@STER franchise. It focuses on 46 voiced idols in 15 units and is a multimedia project spanning two mobile games, several live performances, manga, a 13-episode TV anime, and more.

It was initially released as a mobile game on Mobage on February 7, 2014, but was quickly shut down due to server issues. The game reopened on July 17, 2014. Voices for idols had begun to be implemented into the game on March 15, 2015. 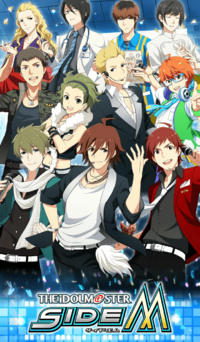 SideM's first game is run on Mobage, a mobile gaming platform. It has similar gameplay to Cinderella Girls and Million Live! in that the basics of the game revolves around regenerating stamina and social elements. Idols in SideM are represented by trading cards of three different rarities—Normal (N), Rare (R), and Super Rare (SR), each with an Unchanged and Changed (+) version.

The Mobage can be played in both the mobile browser, on a mobile app, or on a computer through AndApp. 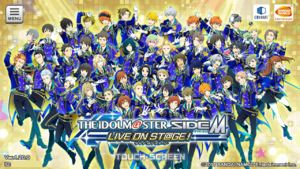 LIVE ON ST@GE!—often shorted to LOS, MSute, or MStage—was announced at the THE iDOLM@STER SideM 2nd STAGE: ~ORIGIN@L STARS~ concert as another mobile game for the series. It was later released on August 30th, 2017. Like the SideM Mobage game, it revolves around collecting cards. However, there are less social elements in that players cannot contact other players or trade cards. It has an additional rhythm game and MV section where the player can watch the idols perform in the songs.

LOS can be played on most mobile devices.

GROWING STARS is an unreleased game, announced on Day 2 of PRODUCER MEETING WELCOME TO PLEASURE 315 G@RDEN!!!. Information about the game's release date have not been released yet. 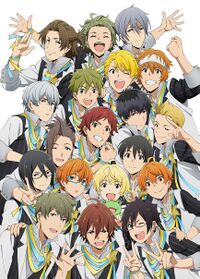 The anime adaptation was first announced on Sunday, February 12th, 2017 at Makuhari Messe Event Hall on the second day of the THE iDOLM@STER SideM 2nd STAGE: ~ORIGIN@L STARS~ concerts. A promotional video announcing the adaptation was uploaded to YouTube on the same day. It consists of 13 episodes and one special episode included in the BD/DVD release.

The anime covers six units' (Jupiter, DRAMATIC STARS, Beit, W, High×Joker, and S.E.M) stories and their development as an idol from being recruited to their first big joint concert. Other idols in 315 Production also appear as a brief cameos throughout all episodes. 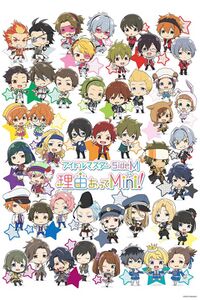 THE iDOLM@STER SideM Wakeatte Mini! was first announced during SideM's 4th anniversary NicoNama on August 20th, 2018, and a PV promoting the series was later uploaded to YouTube. Beginning October 9, 2018, the series was broadcast on TOKYO MX and BS11.

Wakeatte Mini! is a short spin-off series of 12 episodes based on the Wake Atte Mini! manga series, including a few new stories not previously published. It features the cast in chibi form, and each episode introduces one to three units.

On May 16, 2015, Lantis released a PV promoting SideM's 1st concert, 1st STAGE ~ST@RTING!~, for December 6 of the same year. The PV promotes the four units that were voiced at the time (Jupiter, DRAMATIC STARS, Beit, and High×Joker) and hints at additional guests to be later revealed. Since then, SideM has held annual lives, each with their own unique theme.

SideM has also numerous live-esque events, such as Five-St@r Party!!, which intended to further promote the anime series through games, short dramas, and performances. Similarly to SideM's sister franchise, events under the PRODUCER MEETING title focus on skits and cross-unit performances with greater encouragement for fan participation.

On a much smaller scale, SideM has also held various promotional events for CD releases, specifically for the ST@RTING LINE series and WORLD TRE@SURE series, as well as a mini live during the early years of LIVE ON ST@GE's release. 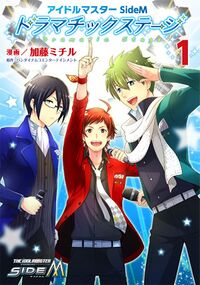 Cover to the first volume of Dramatic Stage

Retrieved from "https://sidem.miraheze.org/w/index.php?title=THE_iDOLM@STER_SideM&oldid=57843"
Category:
Cookies help us deliver our services. By using our services, you agree to our use of cookies.