W is an Idol Unit comprised of twins Yusuke Aoi and Kyosuke Aoi. The two were former pro-soccer players before joining 315 Productions.

Twins who were close to each other throughout their whole lives, Kyosuke and Yusuke grew up admiring soccer due to influence from their family. They became pro soccer players who wowed the audience with their flashy special moves.
One day, during a match, Kyosuke made a risky pass to Yusuke, who strained himself to hit it and was hospitalized as a result. Due to the strain that any further aggressive plays would place on his leg, Yusuke retired from his soccer career, and Kyosuke followed suit. While Yusuke was hospitalized, the Producer scouted him and his brother together to become the idol world’s strongest twins. Eager to become the strongest once more, Yusuke and Kyosuke found a different path… 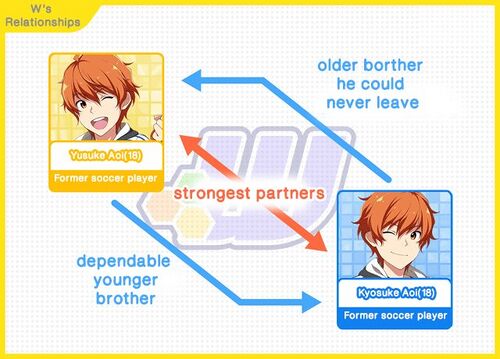 Retrieved from "https://sidem.miraheze.org/w/index.php?title=W&oldid=55518"
Category:
Cookies help us deliver our services. By using our services, you agree to our use of cookies.